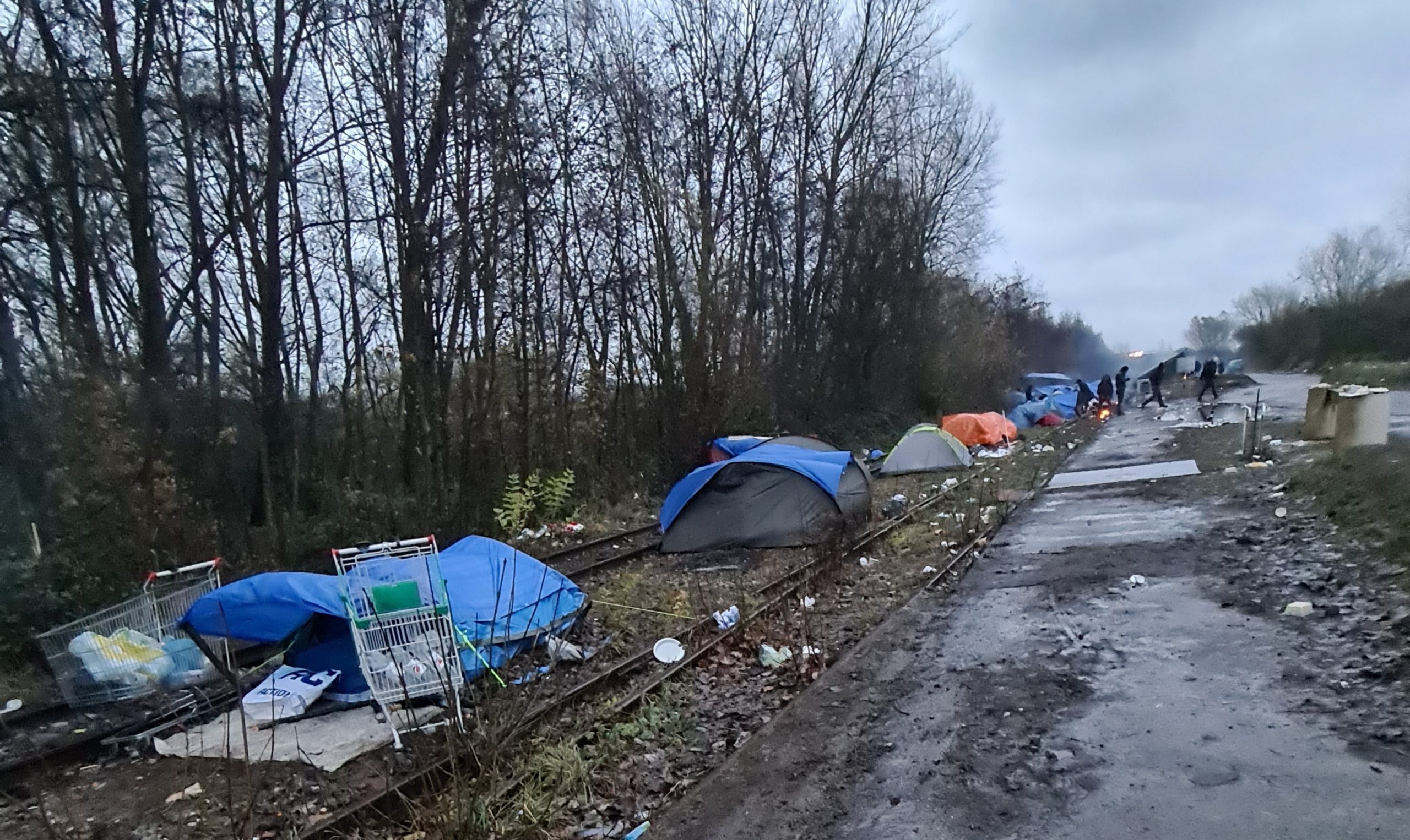 Image of one of the “camps” of Dunkirk, Northern France, December 2021, where police continue to chase and destroy refugees’ possessions, and fresh water taps have been dismantled by the authorities.

As Christmas Eve falls, I wonder if anti-refugee campaigners celebrating the festivities, understand the irony of their marking the birth of a Middle-Eastern refugee baby born to a refugee mother…

It’s here! Christmas has landed – despite Covid’s every attempt to thwart it! And I don’t know about you, but to my eyes, 2021’s fairy-light-laden homes and Christmas baubles seem to be twinkling and sparkling out at the world more than ever before. As if they’re grateful to have made it too.

As the last hectic shops are done, gifts wrapped, feasts prepped and TV scheduling (or fighting over the remote as it might otherwise be known as) is finalised, I can’t help but wonder what those who have laboured all year to harm refugees in some shape or form, feel about the truth of who they are celebrating the birth of, and why.

For example, will Priti Patel and Boris Johnson (along with every Conservative MP who voted to end sanctuary for child refugees and family reunifications) feel a prick of consciousness as they sit down to their feasts tomorrow? Will there be a single moment when their minds dare to grasp that in the nativity play of their political actions, they are anything but on the side of the prophet whose birth granted them a reason to hold “business meetings” with cheese and wine? 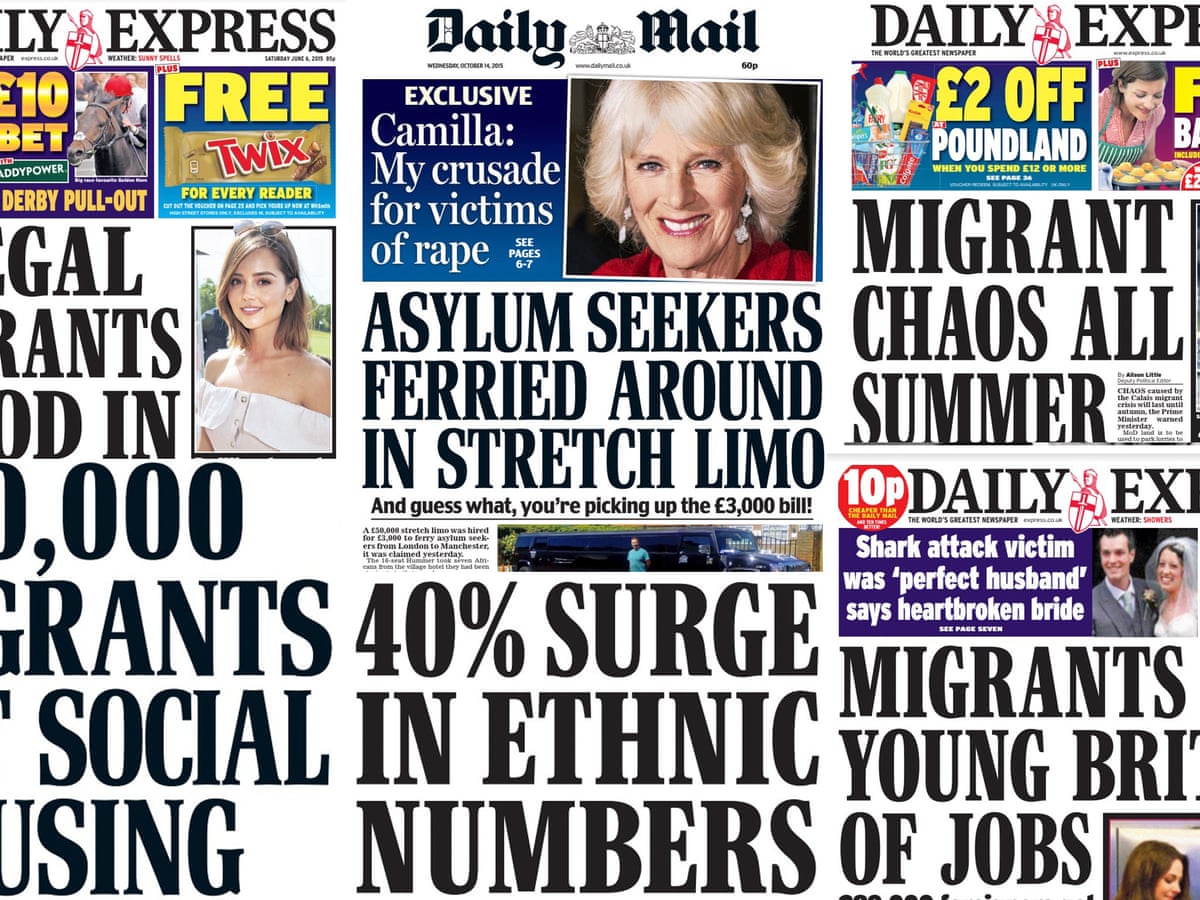 Headlines designed to spark racist hate, fear and anxiety have played a huge role in ensuring refugees are not seen as human beings fleeing what each of us would flee to had we found ourselves in their shoes.

Do the media moguls and journalists who have gone out of their ways to decimate the word “refugee” with the word “migrant”, and create headlines and incomplete stories designed to instil fear and sow a thousand seeds of racist hate, understand that their role in dehumanising the very group of people Mary and Jesus belonged to, have helped in the ending – not saving – of lives and sanctuary for millions?

And will every police or army officer deployed to chase, shout at, take and destroy the meagre possessions of refugees; or those who have profited from selling arms or orchestrating legal land-grabs, sit down with their own families in their own safe homes, and dare to think of those whose lives they have harmed in memory of one who was persecuted and harmed too?

Many people don’t know that Prophet Jesus (Isa) and Mary (Miriam) are believed and beloved by Muslims (like myself) the world over too (in the Qu’ran, a whole chapter is entitled and dedicated to Mary alone: such was God’s love for her). And that across many of the lands refugees are having to flee from, Christian and Muslim communities had lived side by side for centuries: perhaps because in both faiths, along with Judaism too, the overlapping figure of the refugee persecuted for being who they are, is central to our stories of faith.

Which is perhaps why the irony of those with an anti-refugee stance celebrating Christmas grates a little harder one me than it perhaps should (and has done for years).

In the second chapter of the Gospel of Matthew, the Holy Family’s “Flight into Egypt” is laid out, in which King Herod’s desire to slaughter that which threatens his power (in this case, a boy prophet) leads to Mary and Joseph fleeing Bethlehem for Egypt – a long-standing traditional place of refuge. At the time, I doubt there were official forms to fill in for an official asylum process or passports to carry, but the journey will have been an arduous, draining and terrifying one nonetheless. (Leaving everything you know with no hopes of ever making it back again, always is. More so if you’ve had to give birth amidst the trauma too.) 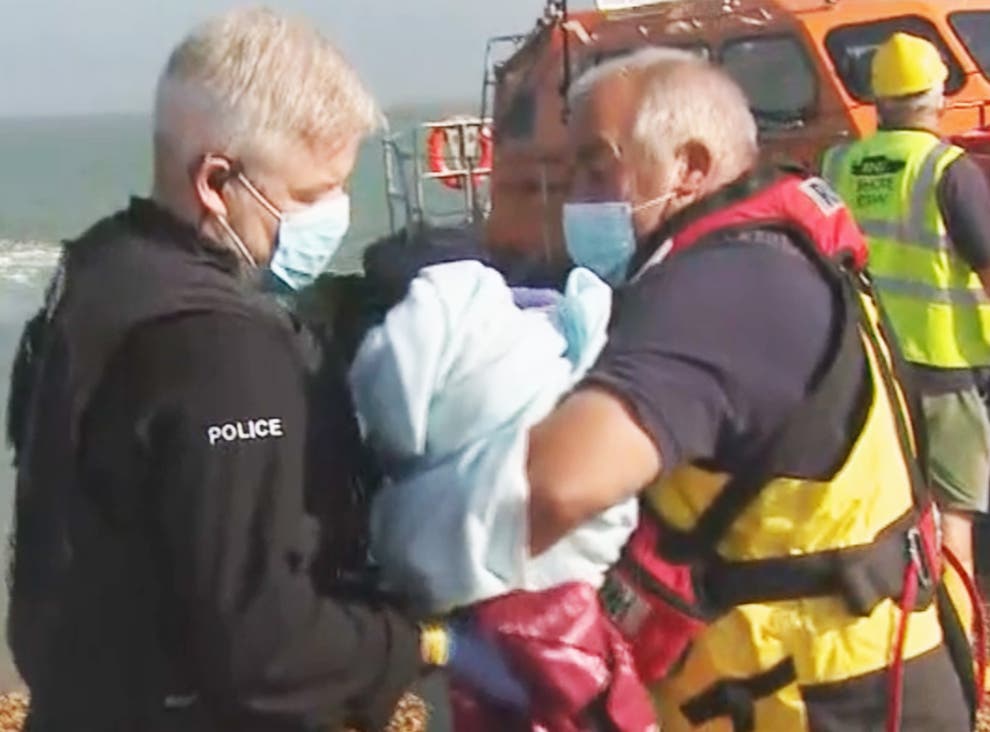 In October 2021, a baby and her mother were rescued by the RNLI after a nine-hour journey across the Channel. Had the RNLI listened to Priti Patel’s orders of “pushing refugees back out” to sea, there is a chance they and all other refugees with them, would have died.

Now imagine if, instead of a desert to cross, this middle-eastern baby and his mother had to survive crossing an ocean. On a dinghy. And that to secure this passage, the mother had to give everything she had left. (Just like so many women are having to do, such as the mother of newborn baby girl Ayyan who was rescued just a few months ago by the s/heroes of the RNLI. Please do hit their page and donate to them if you can. They are Rather Magnificent.)

And imagine that instead of an open gate to walk through and a welcoming city awaiting them, this baby and his mother found electrical fencing that ran for miles, warning them to turn back. Along with police officers armed with guns who have the right to rip apart her tent and possessions and take away everything she has – not just once, or twice. But every two days. Whilst a ruling authority destroys public water supplies, and forces her to live – with her baby – in the mud, rail tracks and grime of the city’s backwaters like my team and I saw just a few weeks ago, so that she remains unseen, unheard of, unfed.

Or better yet, places her in a detention centre for years for daring to flee those who would kill her and her child.

The tragedy is of course, that you do not have to imagine it. All of it is happening right now, and every day, just half an hour’s train ride away across the Channel in France and beyond.

Jesus and Mary were refugees from the middle-east, living at a time when that word wasn’t akin to being a criminal. They were saved by those who dared to welcome and honour strangers and grant them refuge.

The Christmas we know and love, would not exist were it not for kindness and compassion shown to a child and a family who arrived with absolutely nothing.

That, for me, and for all those who will be forsaking their Christmases at the frontline (even in the midst of a pandemic) to welcome strangers who are exhausted and heartsick with what little we can give them, is what Christmas truly means: to open doors, grant refuge, and help however possible.

What if (and oh, how grand would it be!), if everyone who is poised to celebrate the birth of a persecuted “foreign” baby whilst seeing nothing wrong with persecuting or harming others of his or his mother’s ilk, could grasp this truth about Christmas too? And live by it?

Such are the questions I can’t help ponder on this Christmas eve – and pray for hope-filled answers to.

IF YOU CAN, PLEASE DO HELP US GIFT A NEW VAN TO THE MOBILE REFUGEE SUPPORT TEAM THIS CHRISTMAS/NEW YEAR, RIGHT HERE. 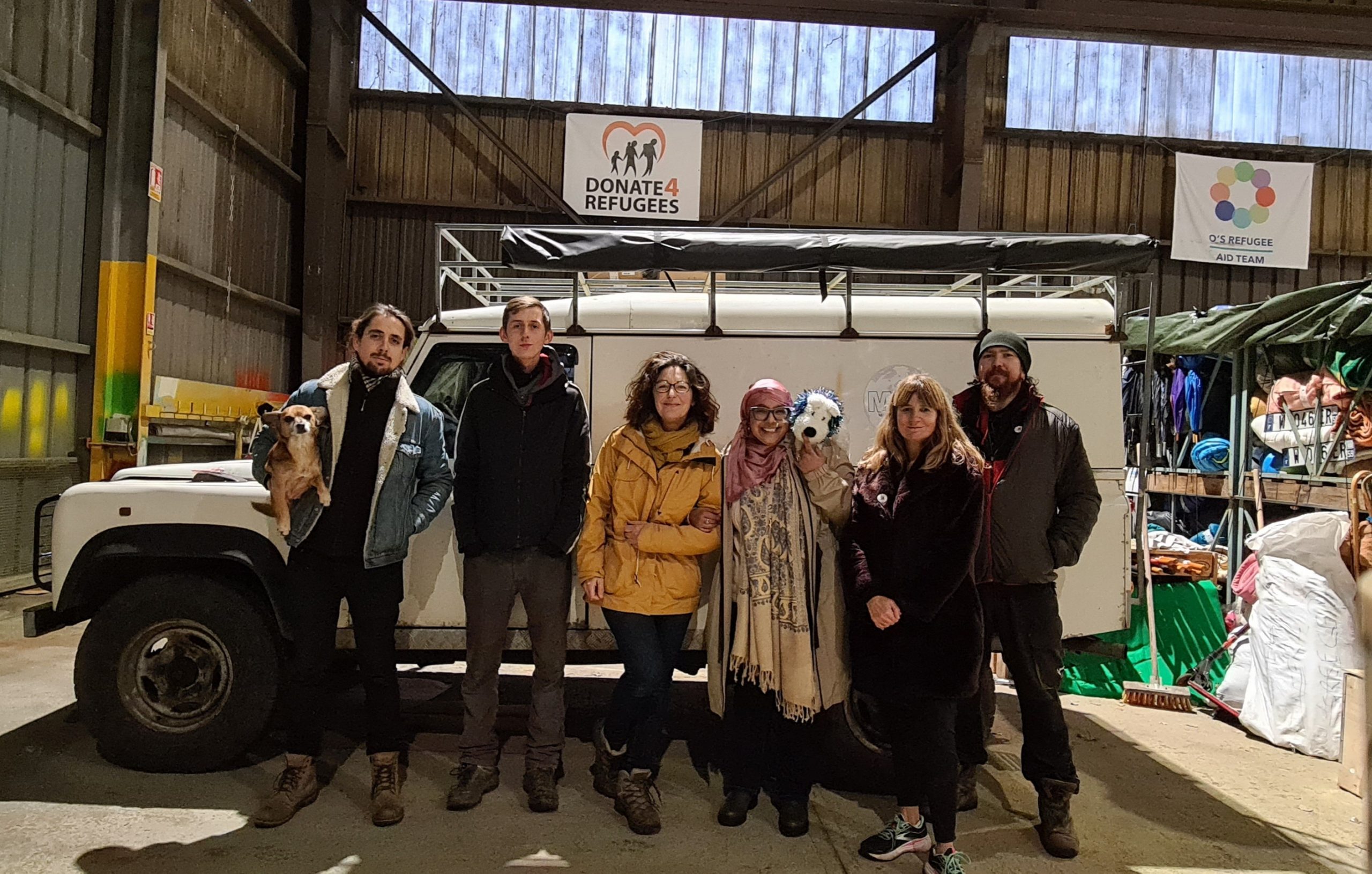 With the Mobile Refugee Support (MRS) team at the MRS-ORAT warehouse in France on 7th December with (left to right): Charlie, Jed, Ros Ereira, Snowy (on my shoulder), Cathy Ashley and Geoff