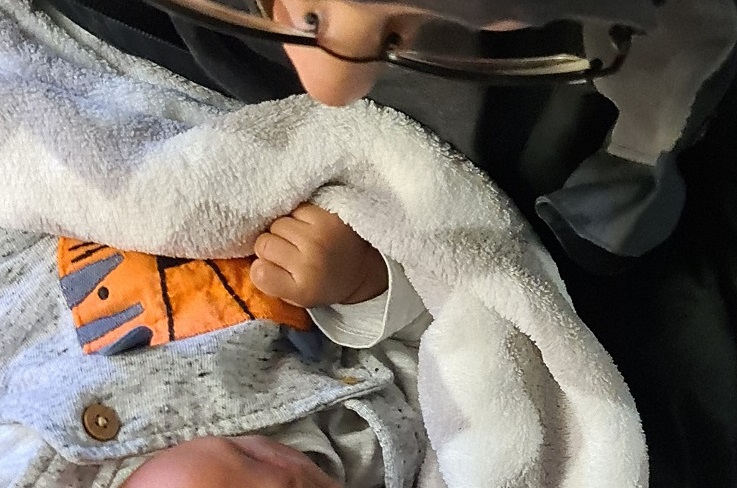 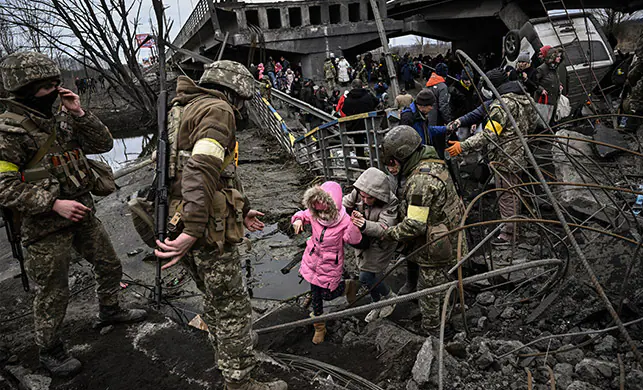 Images of what the refugees of Ukraine are having to flee, have been central to global audiences rightly empathising and wanting to assist them.

I landed from Calais and Dunkirk yesterday, feeling dumbstruck…

More so than I usually do after seeing once more, what refugees must endure day in, day out, no matter their age, or the conflict they are fleeing.

To explain why this heaviness has settled on me, let me start at the beginning…

No-one watching the horrors unleashed upon the peoples of Ukraine by yet another ruthless, cruel, entitled and power-hungry leader of the world, can help but feel aghast and deeply mortified at the speed, atrocity, and force with which Russia’s Putin has decided to take what isn’t his.

News coverage the world over, has rightly focussed on the gut-wrenching heartaches, injustices, and the sheer bewilderment of families old and young who have been forced to flee their homes; or lost loved ones, or are having to bear saying goodbye to the men of their families now bravely staying behind to fight Putin’s far greater armies.

Whilst politicians such as the UK’s own Boris Johnson and Priti Patel and France’s Emmanuel Macron – all with excellent track records of doing everything they can to push people fleeing wars out of their sacred countries – are now under increasing pressure to undo some of their own inhumane laws to make way.

But as surreal and as galling as it is to see yet another war be triggered right before our eyes on this already war-ridden planet of ours, what has felt even more surreal and bewildering, is seeing the lines of racial division being drawn up so clearly for men, women and children fleeing the unthinkable from one side of the planet, as opposed to another.

Lines which have become heartbreakingly clear to me and my team on this convoy, and which non-white refugees forced to witness it all, must now bear witnessing too.

Words and news coverage angles matter – they have a direct impact on the way we feel or react to people and incidents from the off. 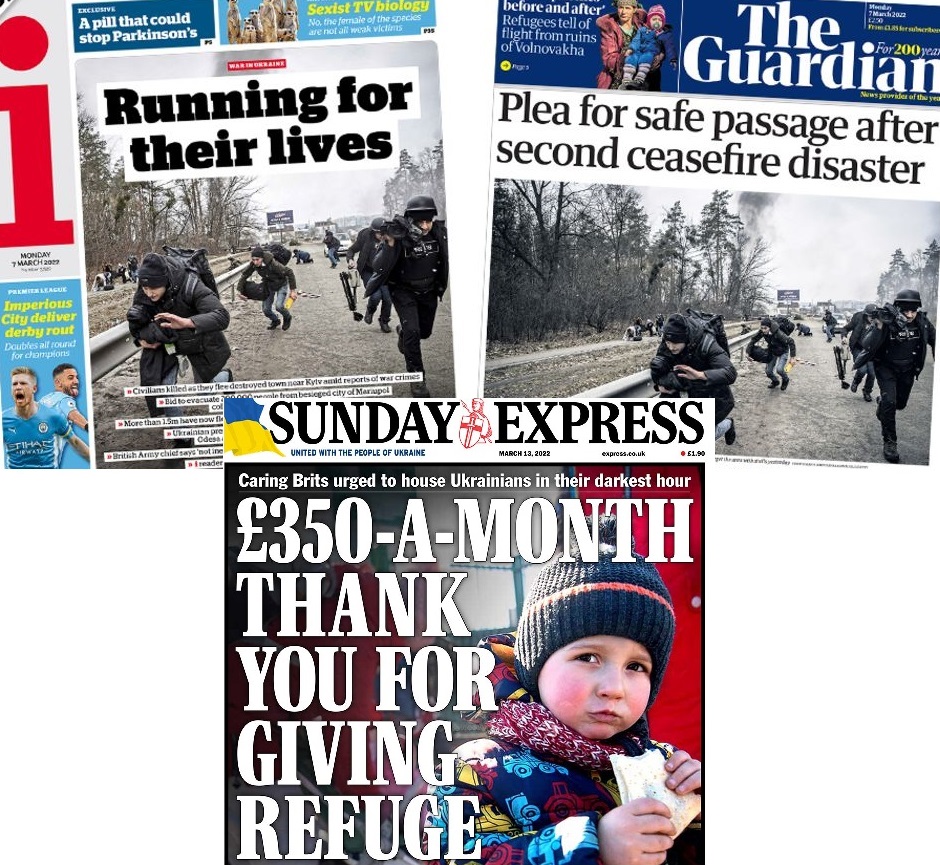 For the first time in years, refugees have been making the front pages for positive reasons.

And when it comes to this latest, horrid war, the refugees of Ukraine have been rightly called just that. (Note: barely a single newspaper or news anchor covering the invasion has referred to the people of Ukraine as ‘migrants’). 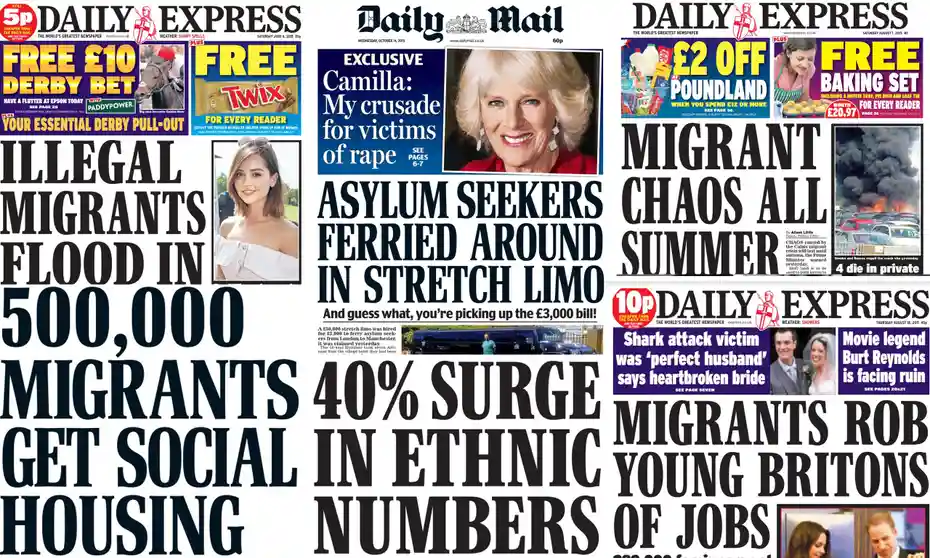 Headlines for non-EU refugees have been neither accurate, nor as generous.

Whilst coverage has made us bear witness to the bombs and tanks destroying cities and towns across Ukraine, almost in real-time.

That word, “refugee” – so precious in signalling to us all a worthiness of salvation – has rarely been afforded to the peoples of Afghanistan, Syria, Yemen, and so many others fleeing violent tyrants too. 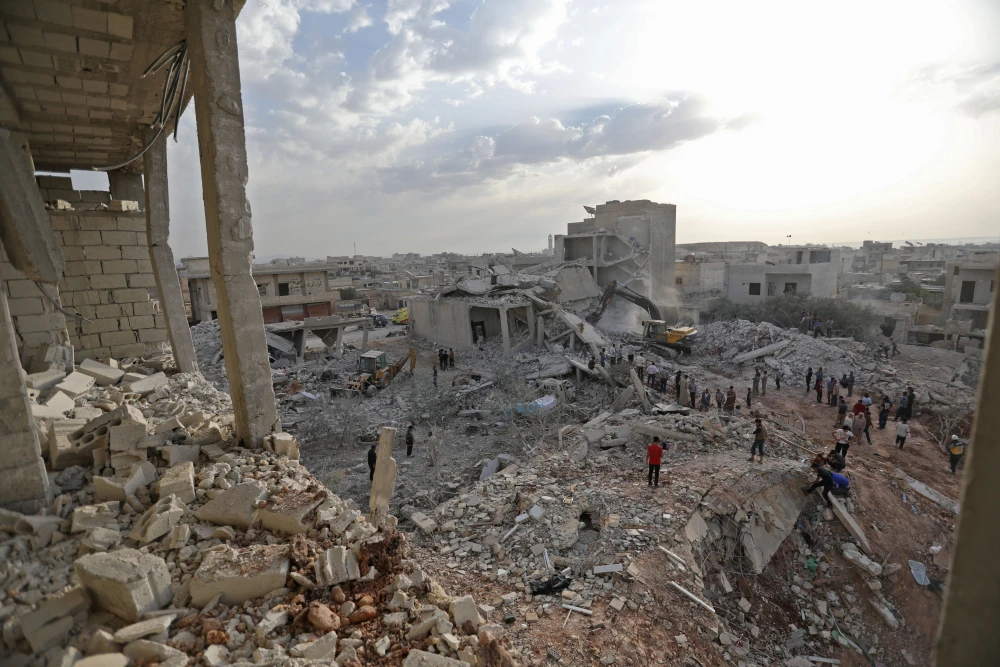 Image: a town in Syria… From Syria to Afghanistan to Yemen and now, the Ukraine, people are fleeing the same devastations.

And as for coverage, how many of us have seen entire regions of say, Kabul, or Damascus – UNESCO protected sites included – flattened to dust on our news screens? I understand that the non-EU sites may not be covered because they are just that – outside of Europe (which the UK now is too) – but the fact is, that the huge galling lack of compassion for refugees crossing into Europe and attempting to make it to the UK exists, precisely because what they are fleeing from too is NOT covered.

Landing in Calais a few days ago, I had been forewarned that yes, there were Ukrainian refugees reaching France and living in the “camps” of Grand-Synthe in France with those who had been surviving there for months and even years. 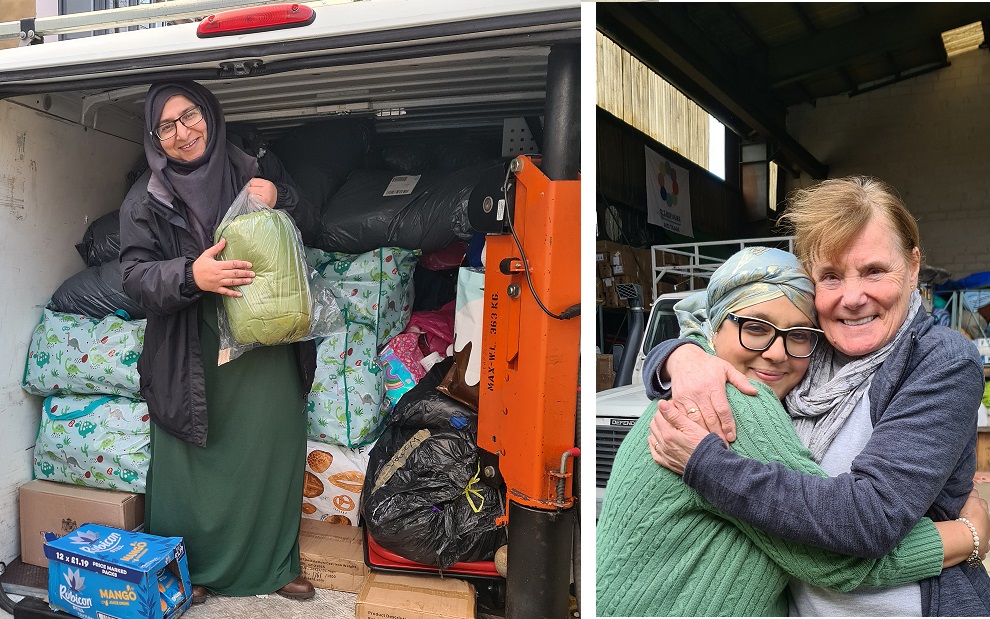 Left: Yasmin, trustee and soul of O’s Refugee Aid Team, with the van of goods we were able to take out. Right: Hugging shero Dorothy Saudemont, dear grandmaman of Calais who had returned back from Belgium gor her weekly distributions of life-saving goodies (and socks!).

Except…that those who had travelled from Ukraine and who were now in the “camps”, were largely of African or Afghan origin: namely students or former refugees, who had found a home and sanctuary or place of study in the Ukraine at the point of war, but who had now found themselves fleeing too.

All other (i.e. white) Ukrainian refugees who were not of the above two categories, had been gathered exclusively on buses, or given a free rail pass, to travel either to Paris or Lille to “be processed” for UK entry as soon as was possible.

Where were they all staying whilst they were being processed – were there new “camps” springing up in Lille now too?

No: luckily, newly freed-up hostels, B&Bs and hotels had been found until their next step of passage could be determined. Rooms that were never available before now, but which have, almost by magic it seems, been found… 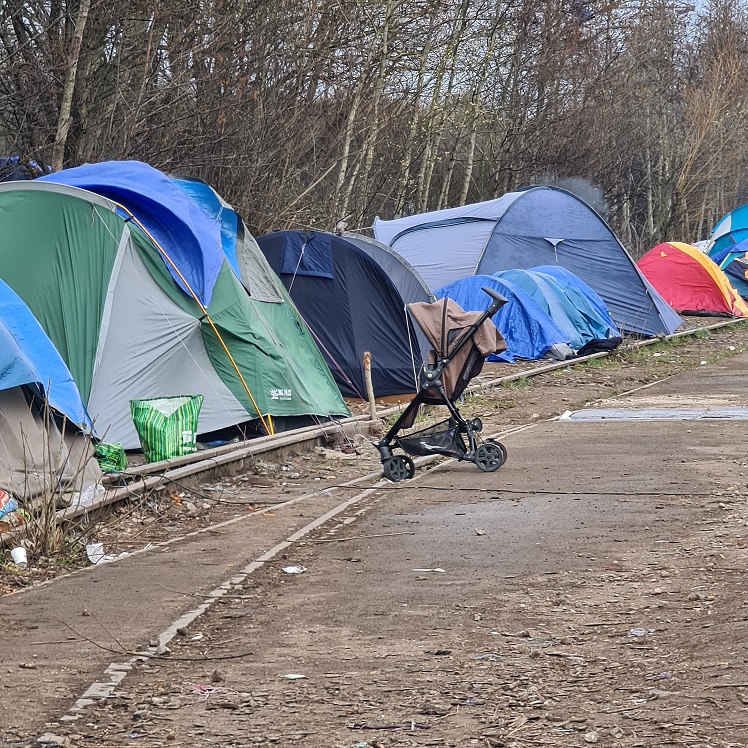 Some of the refugees we meet and try to assist, have been forced to live in “camps” like these for YEARS. With no sign that anyone from a higher authority will help them out.

Do I mean legal processes – the kind ALL frontline refugee aid workers and the likes of Alf Dubs and Safe Passage have been crying out for, to ensure refugee families and children are not stuck in limbo on railway tracks and mud-strewn infested fields for years, and instead, are processed so they can find a safe sanctuary – or their surviving family members?

For to ensure swift sanctuary and reunification for Ukrainian refugees, such processes have swiftly been launched. Not finalised. But definitely begun – processes which even the UK’s Home Office is now working at top speed to officially sign-off alongside the French government.

Spaces for the humane treatment and sheltering of refugees CAN be found – despite the large numbers of people seeking entry, can they?

And governments CAN work together to create safe passages and humane solutions too?

And processes which didn’t exist two weeks ago for refugees fleeing the exact same kinds of tyranny and bombs can be created in that time, yes?

Isn’t that nice to know! And heartbreaking to know too?

For what did the Afghan, Syrian, Yemini, Iranian, Eritrean and all do, to be deemed NOT worthy of the same reaction? The same outpouring of love and support and empathy from all strata of a global society?

On the final day of our convoy, a few hours before we had to leave, we met a young Afghan man: barely thirty, and traversing the mires of Europe with two bullet wounds in his leg – a result of his daring to fight back against the Taliban. 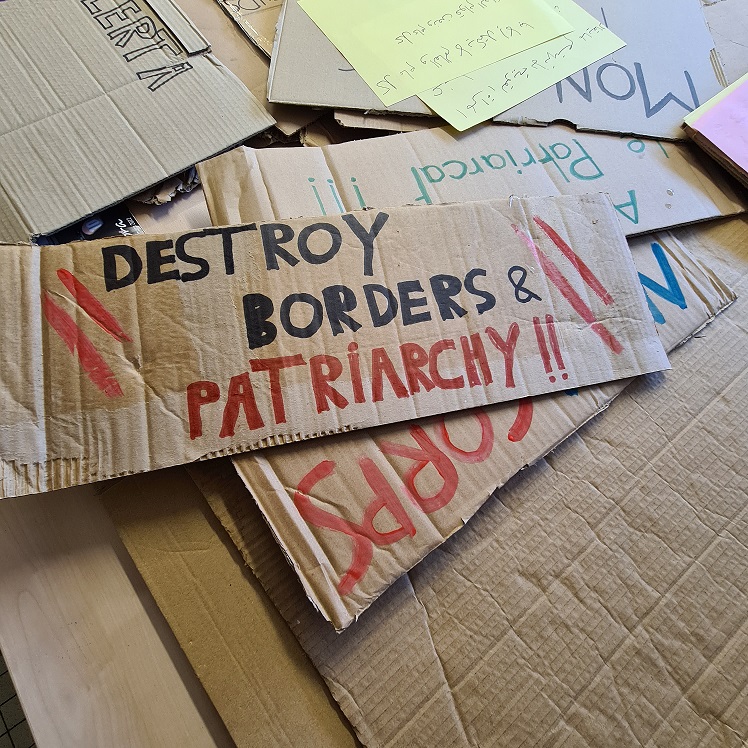 Signs made by women refugees at a Refugee Women’s Centre respite session for a protest march.

The day before, we met baby H – a little girl of just a few months, born in the “camps” for the sole reason that her mother was fleeing what women and children from Ukraine are fleeing too: a dictator’s desires for expansion and control. Except her plight and flight isn’t being shown or written about.

What makes either the brave young man or baby H and her mother, any less worthy of being aided and ‘processed’ for reunification with family than the poor souls of Ukraine?

What makes them ‘migrants’ to be feared and pushed away and treated so awfully, and not “refugees” worthy of speedy salvation?

We all know the answer.

And they know the answer too.

The unexpectedness of the Ukraine-Russia invasion, goes beyond us simply being shocked that yet another dictator has emerged hoping to get into the history books for all the worst reasons. Putin, after all, is no different to Bashar-al-Assad of Syria who goes on bombing his own nation in the hopes of retaining power, or dictator Isaias Afwerki of Eritrea, who has terrorised and jailed and cut up his own people and lands since coming to power in 1993.

For all on the frontline, the real shock lies in witnessing just how fast our world leaders and press can unite, to aid the refugees of this world.

Just so long as they come from the “right”, white, side of that world.

The lines of race being drawn right now by the powers that are, will have repercussions on those being discriminated against in ways we will not be able to see. The only way to tackle it, is to acknowledge it. Speak it. And dismantle it.

Which is why for my teams, and all frontliners we get to work with, we will each go on as best we can, aiding anyone who comes to us for help, regardless of which side of those invisible lines they have been forced to traverse. 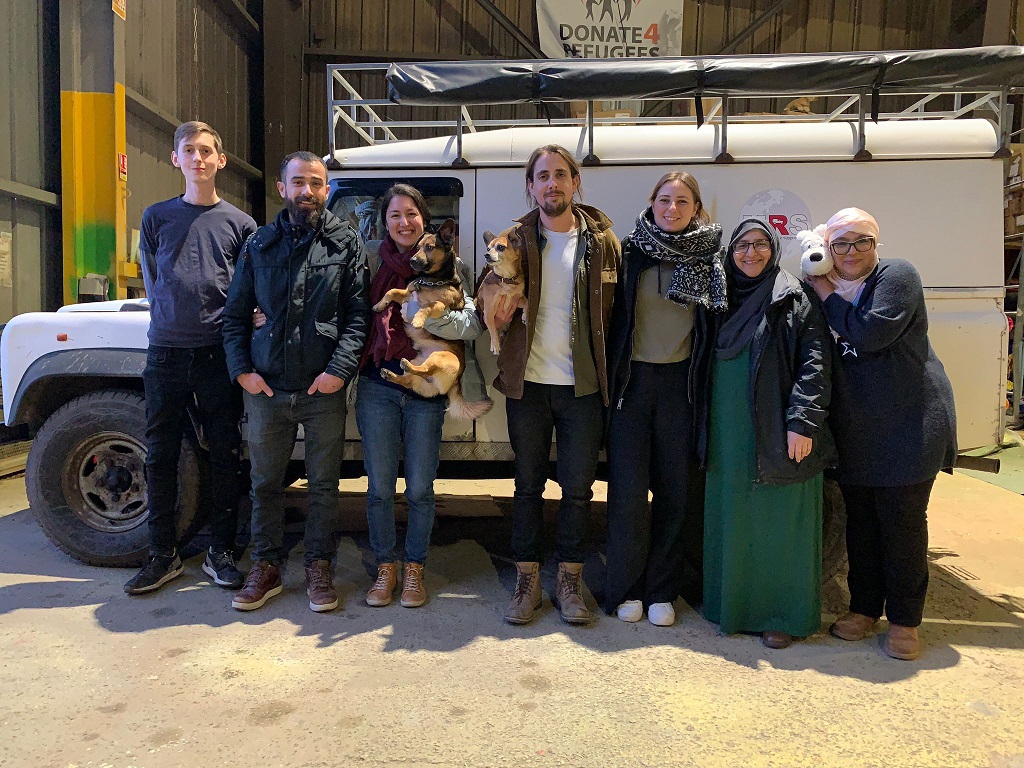 With the MRS team and our Director of Operations in France, Caroline Cotett.